The UT Twin87 captures the essence of both the original classic and modern incarnations of the “87-style” microphone design.

The debate is finally over.

The UT Twin87 captures the essence of both the original classic and modern incarnations of the “87-style” microphone design. For the first time ever, United has created a microphone that duplicates both circuits, and can reconfigure itself on the fly for an exceptional reproduction of the sonic capabilities of both microphones. The UT Twin87 features our own large-core, custom-wound, US-made output transformer, our own custom made 24k gold sputtered dual diaphragm/dual backplate K87 style capsule, and a whole assortment of selected, premium components such as polystyrene, tantalum, multilayer ceramic, WIMA film capacitors, metal and carbon film resistors, and hand-selected transistors.

Vintage, or modern? The UT Twin87 finally ends the debate with a new answer — both. 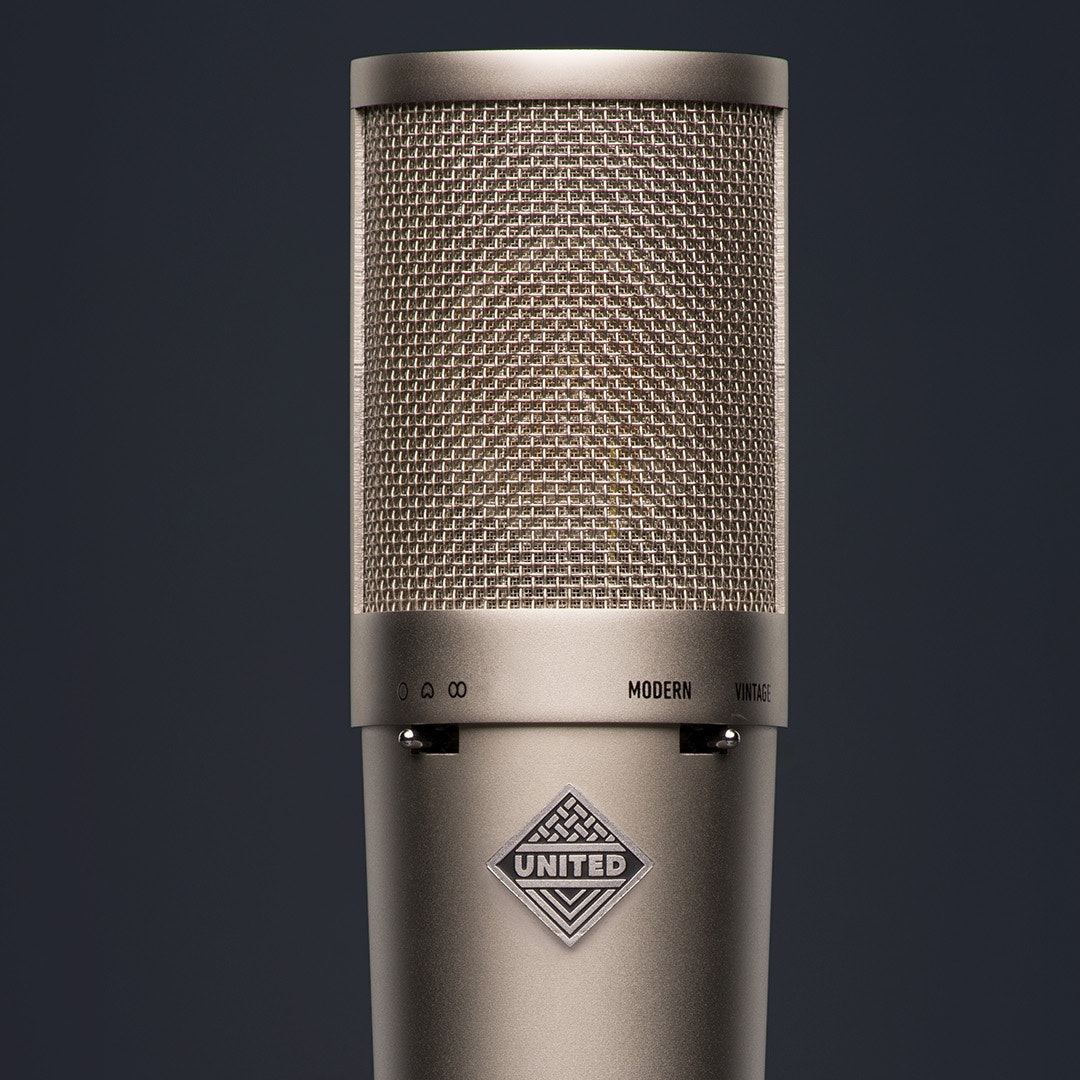 The UT Twin87 offers the authentic sonic capabilities of both “87-style” microphones in one package. United extensively measured component values and types, and circuit differences between ‘golden reference’ specimens of the very earliest available microphones of this style, as well as some of the final revisions produced. These variations were studied, documented, and their audible differences were carefully teased out. No mere ‘EQ/boost’ circuit or digital gimmick would cut it — the UT Twin87 literally toggles between two discrete ‘87 style circuit topologies, separated by nearly half a century.

In Vintage mode, the UT Twin87 polarizes its capsule directly by phantom power voltages, taking advantage of an insulated, dual backplate capsule design — just as the earliest "87-style" microphones did. The high-Z and de-emphasis circuitry use all of the same component choices as the original. This yields a slightly warmer, softer and forgiving sound.

In Modern mode, the capsule is polarized at a higher voltage using an FET oscillator circuit as found on later revisions of the classic mic, yielding a higher capsule sensitivity and feeding a hotter signal into the amplifier circuitry. Its high-Z and de-emphasis circuitry likewise use all of the same component choices as much later “87-style” designs. This yields a louder, slightly brighter and more articulate response, with an extended top end reach and a more ‘up-front’ character. 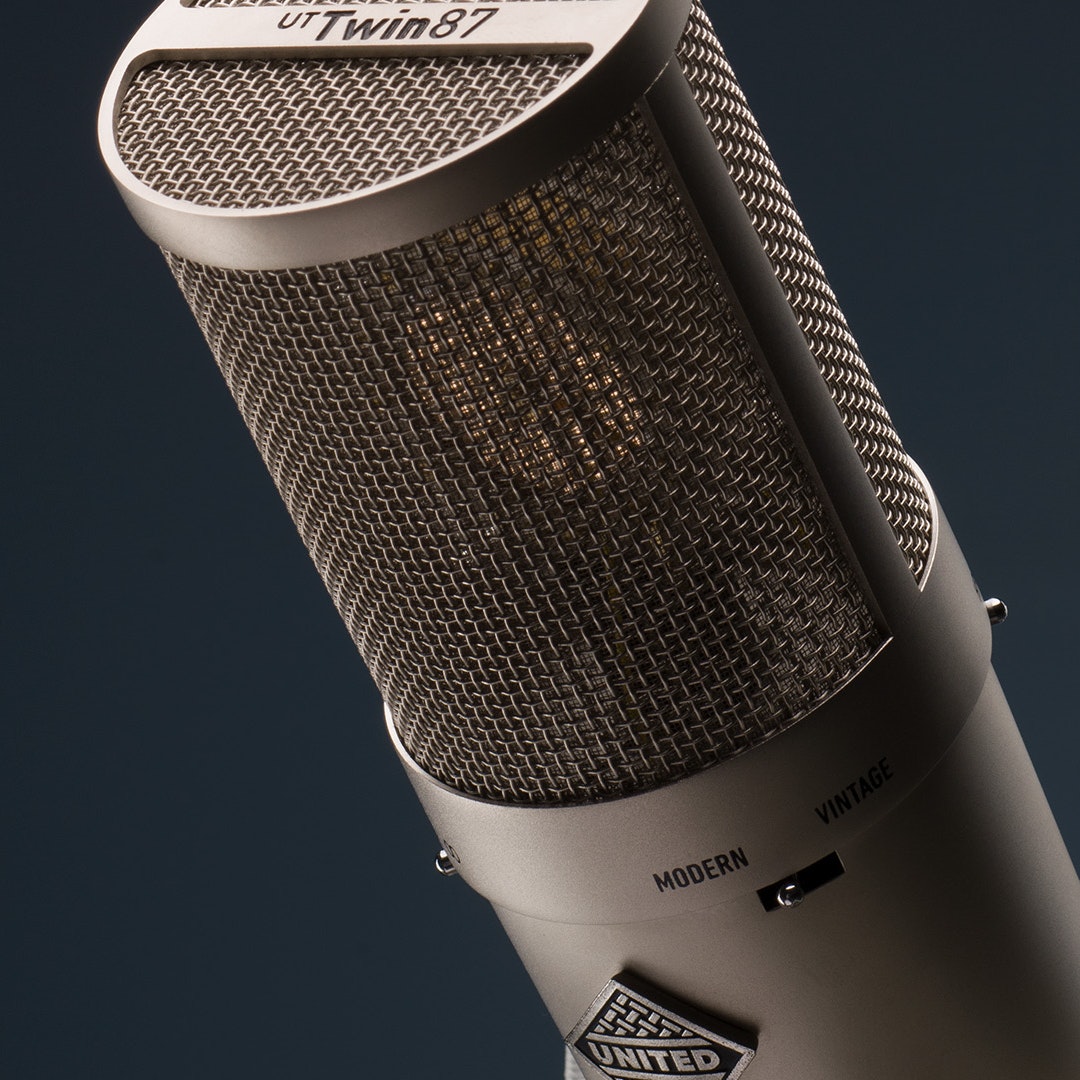 In Vintage Mode, the capsule is polarized simply by normal phantom power voltages (+48v, optimal), and utilizes an insulated backplate design to polarize the front and back sides separately. In Modern Mode, the capsule backplates are connected, and the polarization voltage is raised (slowly, and gently) up to about 63 volts using a specially designed boost circuit. 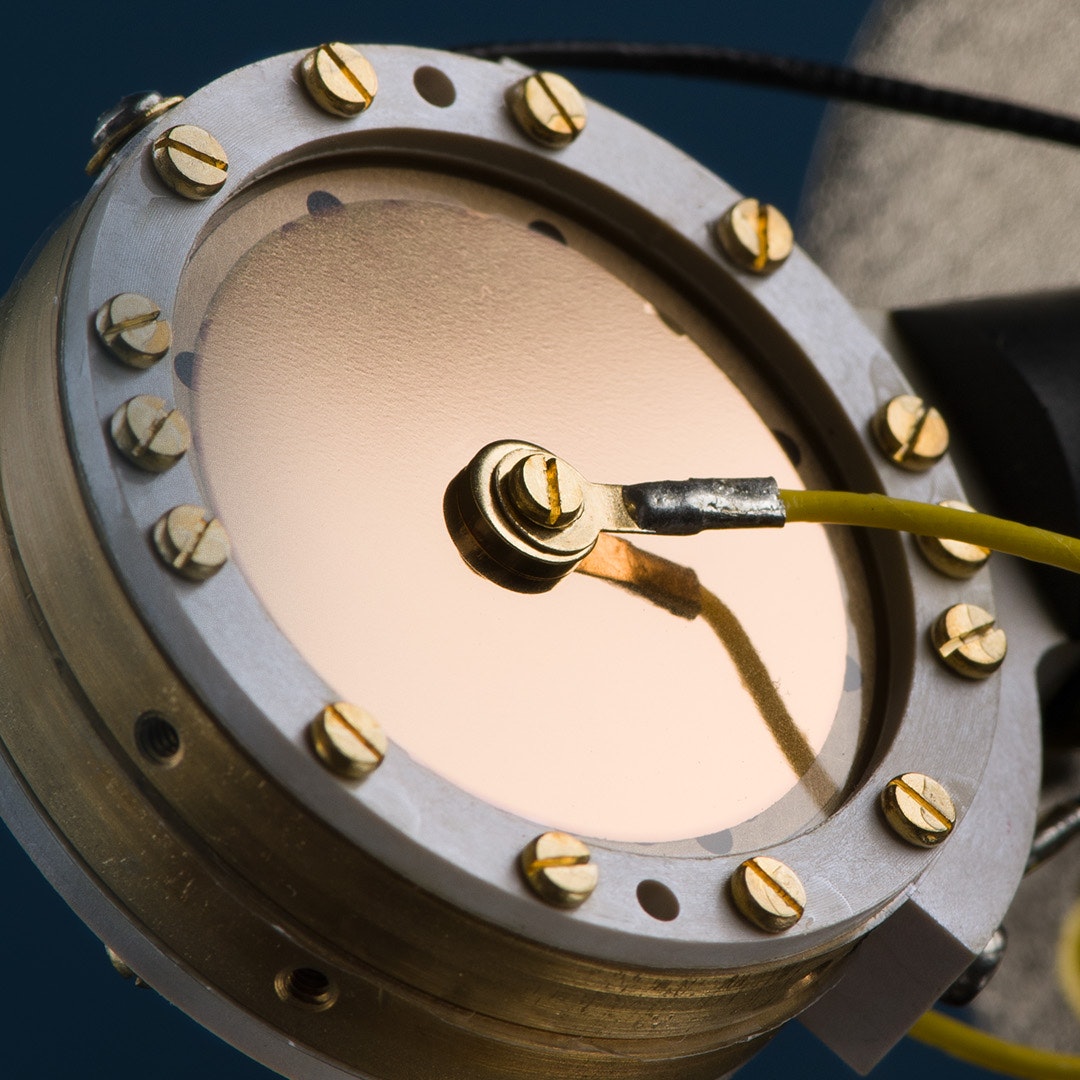 United looked at many iterations of the original German output transformer used in this type of microphone, drawing inspiration particularly from some of the older, larger frame designs. Knowing that the size of a transformer can sometimes be a limiting factor, United developed their own custom-wound part which has nearly four times the metal mass found in any “87-style” microphones. This part truly ensures that there are no bottlenecks or weak links in the design, and that nothing is lost in translation as the signal is passed out of the microphone and down long cable runs. Their transformer sounds open, with high headroom, and clear, three dimensional sound — and will never impede low frequencies.

United's custom-wound, US made transformer is built with large, all nickel laminations. While they could have used a smaller or less expensive transformer; they simply refused to compromise. 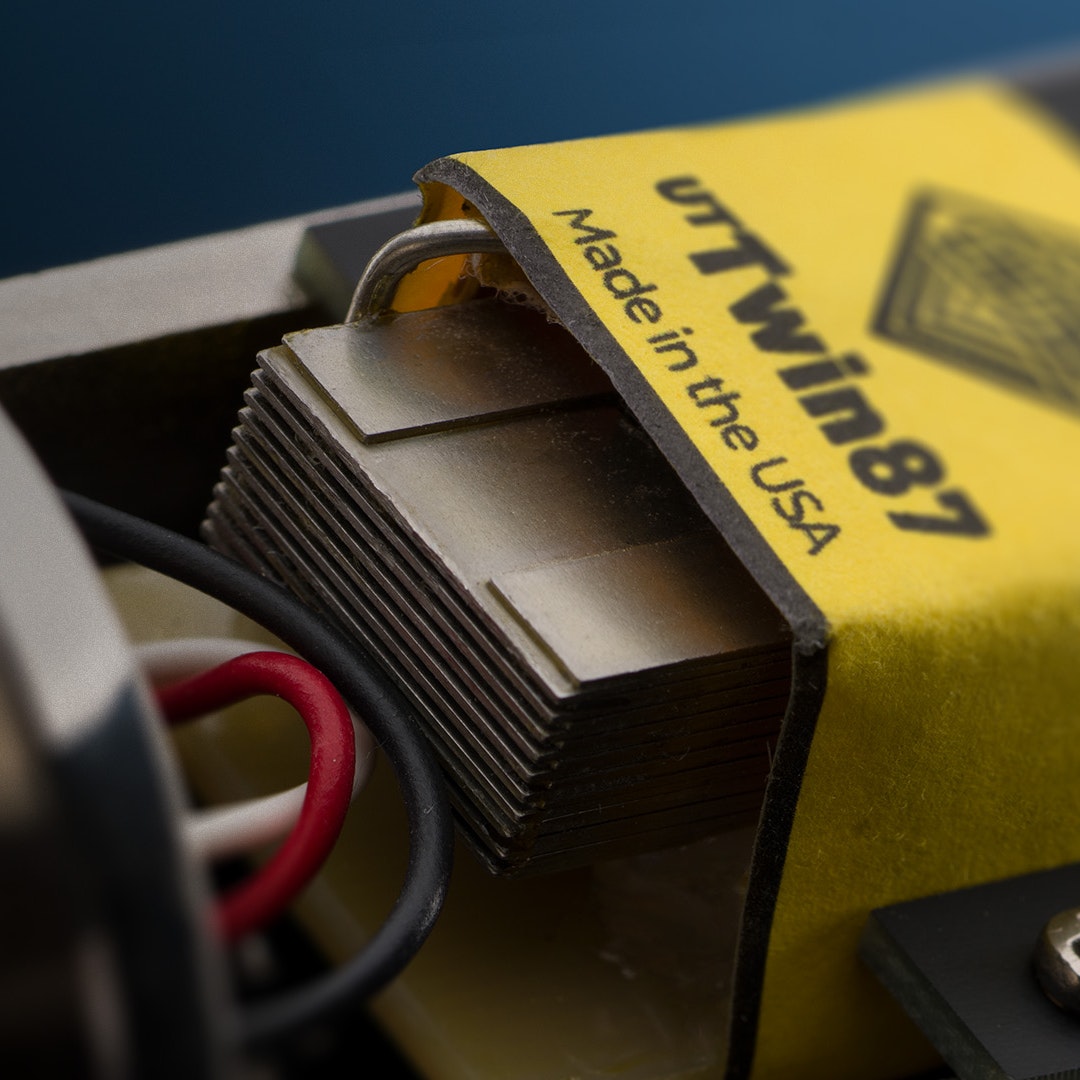 It’s not just another mic — it’s a United.

Modern “87-style” microphones incorporate an output filter designed to block RF and EM interference — much debate has taken place over the years as to whether this filter enhances or harms the sonics of the microphone. The UT Twin87 has also ended this debate, as the filter can be engaged/disengaged at any time, in either Vintage or Modern mode!

When the UT Twin87 is set to cardioid, another boutique modification is quietly engaged: the “true-cardioid mod”. Rather than operate in active (switched) cardioid mode as per the standard design, the UT Twin87 will disengage the pattern select circuitry altogether and decouple from the rear diaphragm of the capsule. This yields a cardioid function that is slightly hotter, more pure, and boasts a better signal to noise ratio.

With all of the extra features and high-end components, the UT Twin87 is a truly exceptional microphone — but it’s real strength is it’s accuracy in providing the same sound engineers have grown to love in every variation of the “87-style” circuit. 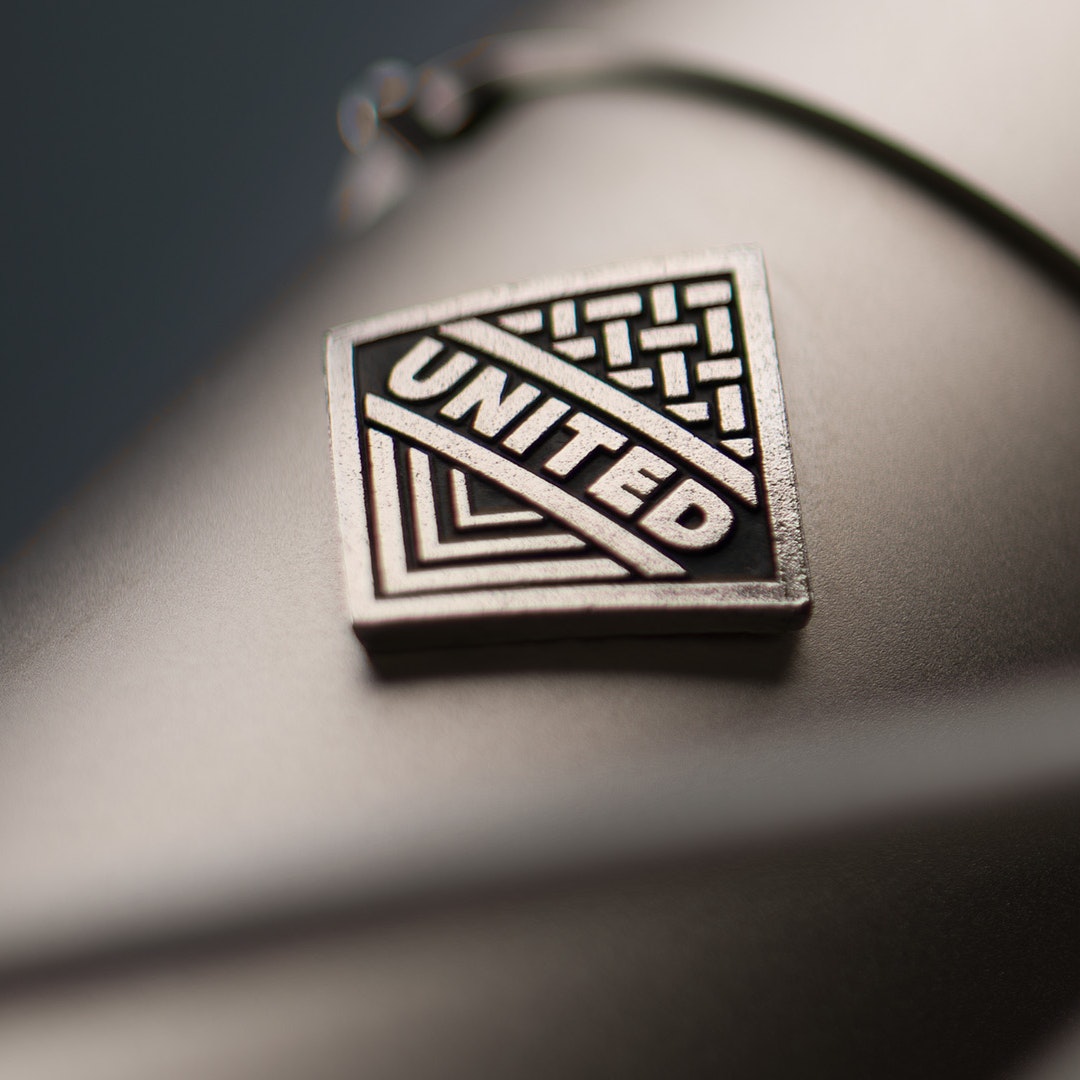